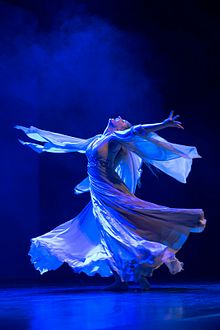 “Does each move really have a meaning?”
“Yes, my dear.”
“What’s the significance of that hip movement?"
Her dark eyes laughed even as she shook her head in disapproval.
“Silly daughter, you will understand soon.  But now you do not need to know, you just need to learn. Now, again.  Step, hip, step, hip, step, around.  Yes, good.  Don’t forget your hands.”
I followed her in a poor imitation. My mother was teaching me the Tanoura. She gracefully moved from step to step in a circle around me, hips shimmying and feet stomping out a beat. Her dress swirled around her like a sandstorm. I had come into my womanhood and tonight we would go into the desert and celebrate with all the women of my family.  I would dance for the first time and become part of our tribe’s sisterhood. Step, hip, step, hip, step, around.  Don’t forget my hands. Step, heel, step, around, hip, hip, hip.  Again, and again until my legs shook with exhaustion, and sweat dripped off my sun-darkened brows.
“Rest now daughter,” says mother, “when you awake, we dance with your ancestors.”
…
The white silk dress had been laid out for me. Outside torches lit our small transient village and the stars shone above the dark sands.  Grandmother waited for me at the edge of the village.  Her white hair covered by a black scarf.  She bent one a finger to encourage me to hurry, while another was pressed to her lips.  We were not to speak to each other until we were at the gathering.
The path through the rolling desert hills was illuminated by the full moon, shining a bright silver through any cloud that dared cross her face.  In what seemed like hours and seconds the warm light of a fire found my eyes.  In its glow, I could see the loving faces of my mother and all of my aunties, my sisters, and nearly every woman in my village.  They stood in a circle waiting for me to join them.
Our elders all wore black, my grandmother joined them and picked up a drum. Boom boom. Boom boom.  Boom boom.
The married woman wore red.  They stood in the center of the circle and invited me and the other maidens to join them.  Boom boom.  Boom boom.  My heart joined the drums, then my hands, my feet, my hips.  Boom boom. We all swirled to the beat.  Hearts joined, hands reached to the heavens, feet stamping the sand.
One by one we fell away as our bodies could take no more of our revelry.  We sat by the elders and picked up our own drums. Boom boom.  My heart and hand were one.  Soon only a single dancer remained.
For a moment I thought she was an older sister or a younger aunt.  The red of her skirts glowed in the moonlight and her dark hair floated around her like smoke.  One-by-one, the drums stopped beating until only her dancing was left.  Yet, we all still heard the beat.
She turned and turned, feet hitting the sand, but leaving no marks.  It wasn’t until she opened her eyes that I understood.
Flames flickered where her eyes should be.  Her black hair was smoke, and her red dress was fire.  An Ifritah, a desert spirit of wind and flame had chosen to visit my womanhood ceremony.  She, fire incarnate danced to honor me.  I was transfixed by her.  As she danced, step, hip, step, hip, step, around I began to understand she danced my future.  The smoke of her hair became pictures that pulsed to the rhythm of desert life.
I fell asleep watching as she danced the story of my life: blood, love, pain, birth, death, tears and laughter.  All together and never alone.  Boom boom.  Boom boom.  Boom boom.  The desert winds ruffled my silk skirt as my eyes grew heavy.  Still, she danced on.
…
I woke as the sun moved over the mountains.  The fire had burned out.  All of the other women had returned home.  My mother waited for me crossed legged.  She smiled and rose when she saw my eyes.  Red skirts fluttered behind her as she took my hand and helped me to rise.  In my exhaustion, I tripped.
“Tell me, daughter, what does that hip movement mean?”

Popular posts from this blog

Of Spiders and Mosquitoes 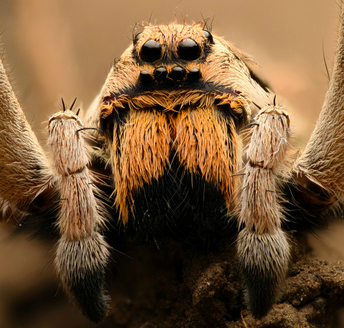 To the Wolf Spider Living in my Bathroom:
At the dawn of time humans and spiders struck an accord of which you are currently breaking.Our ancestors swore oaths that we are expected to uphold.I have kept my end of the bargain and do well to ignore you and your kind when I encounter you outdoors. Even when one of you grows to the size of a small plate and I find you in my canoe.You greatly hastened our approach to land, and I appreciate that you were so gracious as to hide under the seat and scurried away so quickly the moment we hit dry land.It was an accident on both our parts. The accords make room for mistakes.
Yet here you are, in my home and clearly in my line of sight.You flaunt yourself and your size intimidates me.You are far too large for a paper towel even if I could reach you.So here I sit wrapped in a bath towel trying to negotiate with an eight-legged terrorist.
“Please,” I beg “if only you would move behind the dryer where I could not see you, I could take a shower and p…
Read more There was only one set of headlights traveling down the highway toward the remains of San Francisco on the morning that marked ten years since the end of the world.To celebrate this day of memorial all three radio stations left in California decided the appropriate course of action was to unironically play R.E.M’s “It’s the End of the World” on repeat, for 24 hours.Sasha was into it for the first few hours, but after singing her heart out about the fall of New York City, the flooding of New Orleans, the bombing of DC and the rise of Alaska she was starting to feel a bit depressed.As Sasha dug through the hundreds of loose CD’s in her front seat for something a little more upbeat she heard the tell-tale “thump-thump” of running over something.Moments later the cloying smell of skunk filled her car. Half choking Sasha unrolled her window and desperately grabbed for  “The Yellow Book: Guide to Safe Travels in a New World” that resided in her visor. Head half out the window she saw that …
Read more

KB Baltz
Hey! I'm Kirsten Baltz, or KB Baltz, or K B Britt...or whatever. I'm an Alaska woman who likes to play with fish and write stories. When I respond to stories It will be under Kirsten Britt Baltz. Anyways, thanks for the feedback!